The City of Fort Myers is partnering with the City of Cape Coral to send reclaimed water from the South Advanced Wastewater Treatment Facility in Fort Myers through the Caloosahatchee Connect pipeline. This pipeline will cross underneath the Caloosahatchee River, near the Midpoint Bridge, to the Everest Water Reclamation Facility in Cape Coral. 12 million gallons of water per day will be sent to Cape Coral to help maintain freshwater canal levels and provide property owners with water for irrigation and for fire protection services. This will also allow the City of Fort Myers to dispose of surplus reclaimed water in an environmentally friendly way, while reducing the need to discharge into the Caloosahatchee River.

The project is expected to be constructed using a combination of traditional open-cut (trench) pipe installation and trenchless technology.  The pipeline will span from the SAWWTF on Matthew Drive, along Barkley Circle, then across Summerlin Road to Royal Palm Square Boulevard to the connection point in the greenspace on San Marcos just south of Midpoint Bridge where it will connect to the City of Cape Coral’s portion of the reclaimed water pipe.

The City of Fort Myers will be able to dispose of surplus reclaimed water in an environmentally friendly way, while reducing the need to discharge into the Caloosahatchee River. 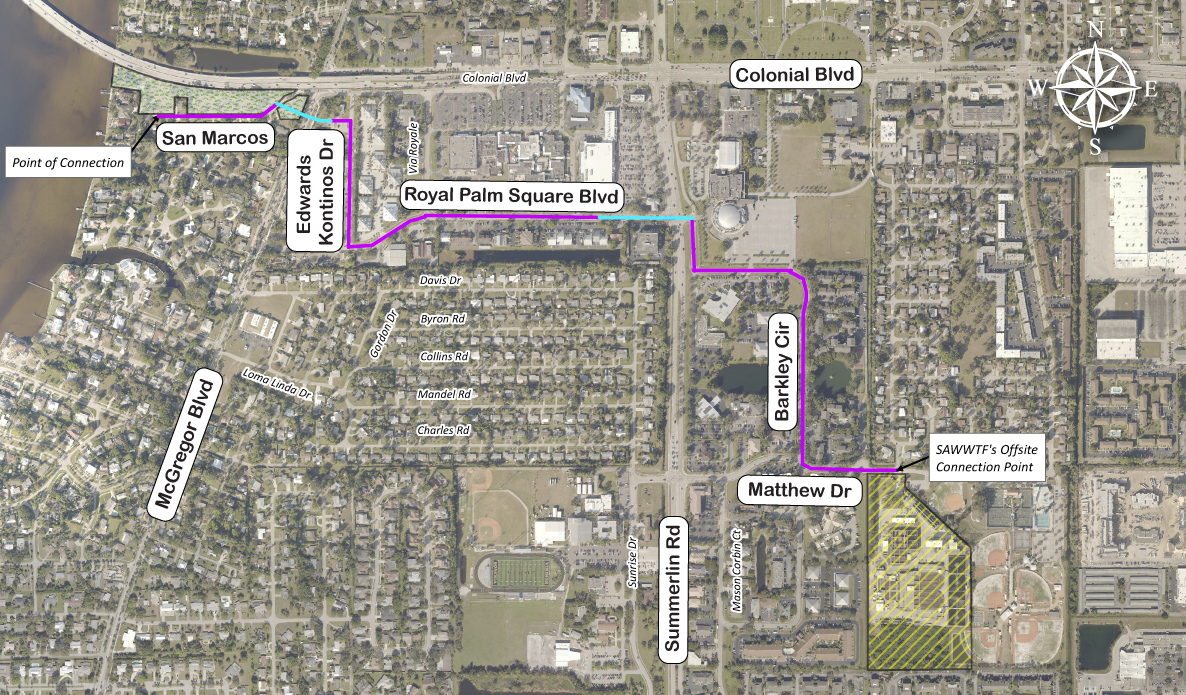 Microtunneling is an underground tunnel construction technique that allows the contractor to install large pipes without disturbing the surface above or any existing utilities that may otherwise be in conflict with the proposed path of the new water main. This method of construction is extremely useful when work conflicts with major roadways, such as Summerlin Road and McGregor Boulevard. Watch the video above to see a demonstration of the microtunneling process. Construction of the reclaimed water transmission main will begin in January of 2022. Crews will tie in to the City of Cape Coral’s project at a connection point in a green space on San Marcos in December of 2022.

In Step Two, a hydraulic jacking frame is set up at the depth of pipe installation, and the microtunneling boring machine is lowered into the sending pit to begin the excavation process.

During Step Three, as the hydraulic jacking frame advances the MTBM forward, the cutter head moves through the ground, breaking it into smaller particles that are then mixed with slurry in a closed-loop circuit and transported above ground. The slurry suspends the excavated soil within the mixture, allowing it to be pumped through the system. The excavated soil is then separated from the slurry and removed from the project while the slurry returns to the slurry chamber within the MTBM to mix with additional excavated soil material.  Removing the ground materials allows the cutter head to advance toward the receiving pit while a casing pipe is installed from behind. A laser-guided system relays the grade and position to the operator at all times. When the jacking system reaches the fully extended position the hydraulic jacks are retracted and another pipe is lowered into the sending pit, and the process starts again until all connected casing pipes reach the receiving pit and the MTBM can be removed.

In Step Four, the water main pipe is pushed through the casing pipe, connected on either end to the open cut portion of the water main and tested.  Finally, the sending and receiving pits can be backfilled and restored. Everything above ground such as roadways and landscaping is preserved.